Albany, GA and Merry Acres Event Center were once again the location for the annual Dixie Trace Field Trial Association’s business meeting and Merit Awards Ceremony. There was a strong turnout on June 3, 2017, and everyone arrived to do the work necessary to continue the goals of our Association and to enjoy an evening in the midst of others that appreciate fine bird dogs, good hunting horses, and the country to use them in. 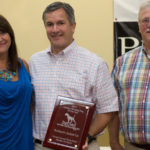 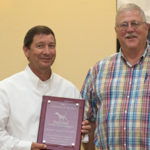 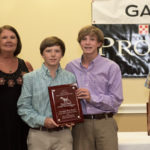 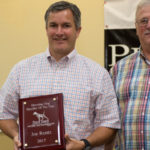 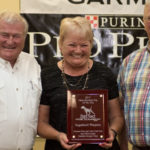 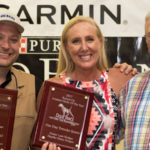 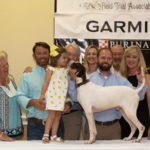 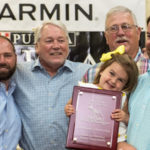 Our 3:00 business meeting was in an attractive building next to the Merry Acres pool.  We discussed many topics and accomplished much. In the area of new business, Turkey Creek Field Trial Club, headed by Grant Rudolph, was voted in as a new DTFTA club member. Brian Peterson represented The Bama Quail Field Trial Club as they were voted into DTFTA. Larron Copeland spoke on the topic of extending membership to AFTCA Region 16. The vote on this issue was unanimous and the addition of the Region 16 Amateur All-Age and Shooting Dog Championships brings the total number of Championships under the DTFTA banner to 11.

Vice President, Joe Rentz, had contacted most everyone prior to the meeting to work on the 2017-2018 schedule. That preliminary work helped us establish the basics on next year’s trial season. The expanding number of clubs and the finite number of dates calls for fine tuning on this calendar as we move through the summer. The schedule will be in our ad in the American Field and on www.dixietrace.org as soon as possible.

On other topics, we voted to continue our support of Dixie Plantation and the Continental Field Trial Club with a $1000 donation to their water tank program. As President, I offered an update on our website and a look at what we hope to accomplish with this technology. DTFTA has been very fortunate to enjoy the knowledge and labor of Kate DeLoach’s assistance in keeping our site posting current and accurate. As most know, we strive to post ads for upcoming trials, drawings for as many trials as possible, and timely results of Association trials. Kate has decided to step out of this role and DTFTA extends its highest thanks to Kate for helping us get to this point. Our website designer and administrator, Rob Boot, has been invaluable to our web success and plans are in the works to move forward in this medium.

During our 2016 business meeting, DTFTA decided to establish a DTFTA Life Patron Award each year. At this year’s business meeting, John Thompson, of Camilla, GA, was voted to be the first recipient of this honor. Mr. John surprised everyone by showing up at the banquet with grandson, Cody Mason, in tow. We were able to recognize him during our awards. A plaque will be prepared and presented in the near future and a report on that occasion will follow.

The current list of clubs in the Dixie Trace Field Trial Association follows:

The Merry Acres Special Event Center was home to our 5:00 social hour and the following banquet. People had time to view our silent auction items which added greatly to the ambiance of the room. Tony and Becky Gibson brought a striking carved wooden hunt mirror. Chris Mathan brought a large framed art quality photograph of a motionless, wide-eyed pointer as she stood for a strong covey of quail on the wing. Chris also brought three framed Marguerite Kirmse prints that are part of dog art history. Mary McPherson brought two of her beautiful oil paintings and also put up for auction one of her oil paintings of the buyer’s choice. Greg Blair attended the festivities and Purina graciously donated 12 bags of feed for our auction. Garmin and John Rex Gates sent a Pro 500 training collar that we were grateful to have. Ivey’s Outdoor and Farm provided a $200 gift certificate that we offered as a door prize. It was the last item on the evening’s agenda and Harold Johnson of Shorter, AL was quite pleased to be the recipient. DTFTA is blessed to have many top dogs and this year breeding opportunities were offered to Dominator’s Rebel Heir and Just Irresistible, thanks to Jamie Daniels, and also to Dunn’s Tried’N True, thanks to Luke Eisenhart. Strideaway and Chris Mathan provided hats and decals for the auction and they were quickly purchased. We appreciate perennial sponsor, Insurance Market of Dawson, GA, and owners Steve and Marilyn Wiley who always make a financial contribution to this event.

Table settings were beautifully decorated thanks to Polly Moore, Christy Swearingen, and Gail Walker. Polly had cut fresh zinnias from her garden that very morning. Thanks are extended to the ladies for adding the special needed touch to the room. Photographs of local plantation scenes fill the hallway to this large dining area. Diners were served an excellent meal of beef medallions and grilled quail with all of the trimmings to please even the most discriminating epicurean.

The Merit Awards were next in the evening celebration. The award plaques were under cloths on tables to the right of the podium and the prized oil painting for the DTFTA High Point Dog of the Year was also draped as it rested on the nearby easel. Mary McPherson of Burnt Corn, AL, painted this fine and highly coveted portrait. Thanks to Chris Mathan of Pavo, GA, for supplying the photograph for Mary to base her work on.

The Amateur Derby of the Year and the Runner-Up Derby of the Year were won by the husband and wife team of Lane and Darcy Hodges. Fresh from the German Shorthair trial scene and new to our circuit, Lane took the top honor with One Day Winnit It Girl. Darcy handled One Day Tomoka Girl to the Runner-Up award. Husband and wife teams were in fashion for the amateur stakes as Joe Rentz won the Amateur Shooting Dog of the Year with Redland’s Jacked Up and the Runner-Up Amateur Shooting Dog of the Year Award with Rentz’s Fire and Ice. Both dogs are owned by Joe and Tricia Rentz, with Joe on the whistle as Tricia scouted these top competitors.

Since DTFTA by-laws require at least two placements within a given stake there was not a winner in the Amateur All-Age category.

Open Derby of the Year went to the bright pointer, Mayhaw King of the Hill. King is owned by Mayhaw Plantation. One of his placements was under the direction of Trey Mills and the other placement, winner of the Continental Derby Championship, was under Lee Phillips. Trey manages Mayhaw Plantation and was responsible for King’s early development. The Runner-Up Open Derby of the Year award went to Georgia Boy Rock for the Bruce and Karen Norton and the Wes and Eli Rountree team. Mark McLean handled Rock to his Runner-Up Champion win in the Continental Derby, among other placements.

Open Shooting Dog of the Year went to the veteran, Sugarknoll Warpaint, owned by Pete and Chris Del Collo and Allen Linder, and in the string of George Tracy. It was quite special having George and Mary Tracy present, considering the evening marked their 50th wedding anniversary.

The Open All-Age Dog of the Year went to Dominator’s Rebel Heir, owned by Jim Hamilton, of Atlanta, GA, and handled by Jamie Daniels. This was Jim’s first DTFTA Banquet. Runner-Up All-Age dog of the Year went to Dunn’s Tried’N True for owner Will and Rita Dunn and handler Luke Eisenhart. Both of these dogs had banner years and their talents are widely celebrated.

The coveted Dixie Trace Field Trial Association High Point Dog of the Year award went to Dominator’s Rebel Heir. The oil painting by Mary McPherson was claimed by owner Jim Hamilton, of Atlanta, GA, and handler Jamie Daniels of Bronwood, GA. Jamie and scout, Judd Carlton, had Reb proudly posed on the table along with Jamie’s wife, Allison, daughter, Rose Marie, and Jamie’s parents and his grandmother, along with numerous other well-wishers, to enjoy the fruits of a sensational season.

Mark the first Saturday in June, 2018, as the next Dixie Trace Field Trial Association Banquet and come enjoy it. Each year, as we experience the grand tradition of bird dog field trials, the history of the sport continues. We are all fortunate to have the opportunity to help shape it for the betterment of the sport.